Posted at 15:14h in Sustainability by Shen Ge 0 Comments
0 Likes

If you think research into transmission gears is yesterday’s news, think again. Fallbrook Technologies, a startup company in Austin, Texas, has developed the NuVinci, a continuously variable transmission (CVT) technology that compared to conventional transmission, provides improved performance and flexibility. This tech can be applied in anything that requires transmission gears which includes bicycles, automotive accessory drives, electric vehicles, lawn care equipment to small wind turbines and beyond.

The originator of this brilliant little design is a man named Donald C. Miller (Don) who was a cycling enthusiast. He wanted to build the fastest bicycle. Despite not having formal engineering training, his self-motivation drove him to not give up until he came across CVT. Though this idea was originally developed by Leonardo da Vinci in 1490, various problems such as cost, scalability, efficiency and weight have kept CVTs from widespread adoption and limited their practical applications. Don decided to change that.

In 1998, Don and several angel investors formed Motion Systems, Inc. (MSI) to develop this tech. By 2000, he finished filing the first patent and at the end of the year, with new collaborators Miller and the Weiss Group LLC, formed a new company called Motion Technologies LLC. A second financing round in 2003 allowed validation and further development. Robert A. Smithson, a transmission expert, was incredibly impressed that he joined the company as a consultant and later as VP of Product Development before becoming the company’s CTO. Thanks to Smithson, a subset of CVT — the infinitely variable transmission (IVT) — was discovered. An application in wind energy further excited the team.

How is NuVinci different from conventional transmissions?

Unlike conventional transmissions that have a fixed number of gear ratios, a CVT has an unlimited number of ratios within its particular ratio range. This enables operating the power source at an optimum speed, which usually occurs where the power source is either most efficient or is producing its highest torque (directly related to power). While the power source is typically an engine or motor, it can also be human power, as in a bicycle.

When used in an automotive transmission, a CVT improves performance by allowing the engine or motor to continuously deliver peak power to the drivetrain while steadily allowing the speed of the vehicle to increase. When power demands are below peak levels, the power source is allowed to operate at its most efficient possible condition. The latter allows engines to operate at their most efficient  speed when  the highest power isn’t needed, which reduces fuel consumption.

What are the technical details of NuVinci? 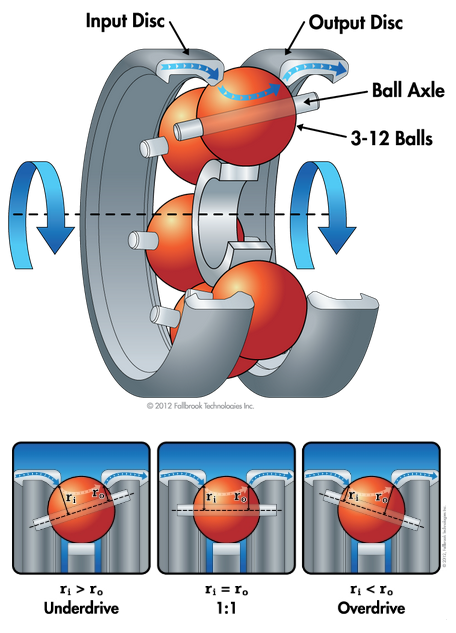 NuVinci technology is a continuously variable planetary (CVP) that is based on a set of rotating, tilting balls fitted between two rings. Credit: http://www.fallbrooktech.com/nuvinci-technology

NuVinci technology uses a set of rotating, tilting balls fitted between two rings. The configuration has

What’s next for Fallbrook?

Fallbrook does face potential challenges in the legal area. The America Invents Act passed in 2011 introduced costly new hurdles to patent abuse challenges in an effort to stop frivolous lawsuits. Yet, Google wants still more complex and restrictive requirements, which could empower large multinational corporations while threatening small businesses’ ability to defend their intellectual property. Jeffrey A. Birchak, associate general counsel and VP for intellectual property at Fallbrook, told Watchdog.org his company has been fighting “the pervasive and overwhelming PR campaign established to roll back patent protections” for a decade.

Otherwise, the future looks bright for Fallbrook. It has expanded beyond Don Miller’s initial dream of changing the cycling industry (as well as being the fastest cyclist) and has dived headlong into the automotive industry by forming licensing agreements with three major companies — Allison Transmission, Dana Holding Corporation, and TEAM Industries. Allison is the world’s largest manufacturer of automatic transmissions for medium and heavy duty commercial vehicles as well as a leader in hybrid propulsion systems for city buses. Dana has developed Variglide based on NuVinci and tested it on both passenger vehicles and fork lifts. TEAM plans to have initial production of CVT for electric and traditional gasoline-powered light vehicles. Of last report, in November 2015, Fallbrook signed a licensing deal with German auto supplier giant Continental AG. Fallbrook has also continued adding more qualified members to its management. Roger Wood, an industry expert in power conveyance and energy management, joined the company’s board of directors on February 2, 2016. Previously, he was the CEO of Dana Holding Corporation.

Last but perhaps of greatest impact, Fallbrook is investigating using NuVinci in wind turbines. The CVT can increase the amount of electricity generated by operating at higher efficiency in all wind conditions, and alleviates fatigue loads caused by gusts.  Outside of a wind turbine’s ideal speed, efficiency drops and NuVinci technology solves the problems at higher and lower wind speeds.  It can also shift quickly enough to capture gusts, a difficult situation for existing wind turbines. According to a report produced by the National Renewable Energy Laboratories, NuVinci technology can potentially reduce the cost of energy by 5.5% or more. We at Impact Hound are especially excited on this prospect.