Posted at 12:49h in Crowdfunding, Energy, Gadgets by Shen Ge 0 Comments
1 Like

UK firm Deciwatt has set out to solve one of the world's pressing problems -- lack of access to electricity -- by a new device called the GravityLight. About 20% of the world population has no access to what's now considered a basic necessity. With a rising population, especially in developing countries, unfortunately, this percentage is expected to remain the same for the next 20 years. Without cost-effective alternatives, most people have to rely on kerosene lamp. A kerosene lamp is a bottle filled with a fuel and lighting with a wick at the top. Kerosene lamps have four major disadvantages: A company called Deciwatt proposed a solution via a prototype device called the GravityLight. Unlike other power sources, the device invented by UK industrial designers Jim Reeves and Martin Riddiford requires no battery, sunlight, or wind. Its energy source is based on fundamental physics -- gravity. Seconds is all that's needed to lift the 12 kg bag which powers the device. As the weight slowly falls, GravityLight can produce 20 minutes of light. Riddiford, now 60, a cofounder of London-based product design firm Therefore and now a cofounder of Deciwatt, got the idea six years ago after leaving a meeting with a charity interested in solar tech. “I just sort of had this vision of, well, why can’t you use human power and store it as potential energy rather than in a battery,” he says. Riddiford has a record for innovative devices including the Brinlock Abacus calculator which was the first calculator with number-shaped buttons. He stated that he regrets not having done charitable work overseas in his youth and hopes to make up for it with his light. In 2013, Deciwatt raised £265,000 on crowdfunding platform Indiegogo to fund the tooling, manufacture and distribution of its first 1,000 lights. More recently, in 2015, Deciwatt won the Shell Springboard program, which supports young entrepreneurs with innovative low-carbon ideas. It received £150,000 to help develop the product further and expand into new markets, beating 150 other applicants to take the prize. Deciwatt says the GravityLight can cost as low as $10 for the owner. The actual price varies across different markets. The price will reduce in the future as mass manufacturing and the increasing efficiency of LEDs drive the cost down. Even with current prices, the owner can see a return on investment after just three months.
Read More 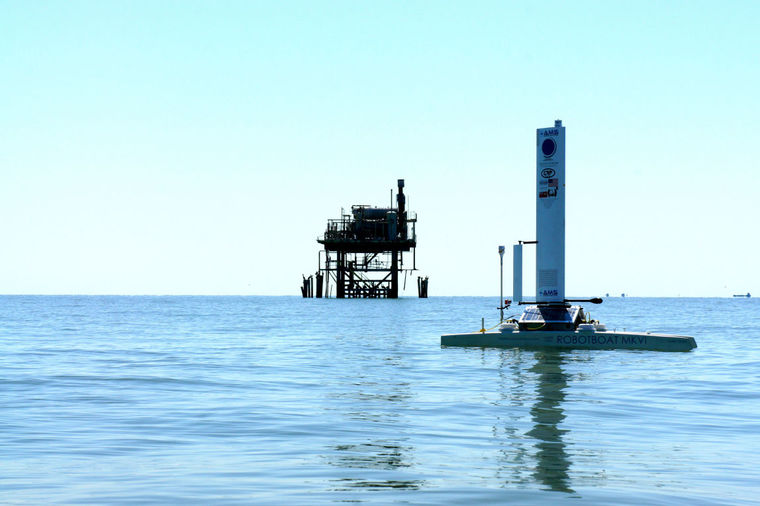 Datamaran, a surface robot, by Autonomous Marine Systems. Credit: Autonomous Marine Systems[/caption] On June 18, 2015, I had the chance to talk with Eamon Carrig, the Chief Roboticist of the surface ocean drone startup Autonomous Marine Systems. The CEO, TJ Edwards, and Eamon Carrig were friends at Princeton University and later both worked at Planetary Systems Corp., a spacecraft mechanisms company in Maryland. Due to a combination of interest in robotics and sailing as well as concerns about climate change which is directly indicated by ocean health, they built their first sailing robot in 2006. The company was incorporated in 2009 and after several years of work, the founders quit their jobs to focus full-time on AMS in late 2012. The primary motivation came from the emergence of company Liquid Robotics which TJ and Eamon saw to be much too expensive for the mass deployment. They decided their technology could do better at far lower cost. In 2012, they launched a successful Kickstarter campaign where they raised over eighty thousand dollars to build a prototype. They underwent a 6 week training session through the National Science Foundation's Innovation Corps Program in Washington D.C. Later that year, they were accepted into the startup accelerator SURGE in Houston. Thanks to the mentorship and connections made through SURGE, they acquired funding to execute pilots and demonstrations.. When asked about the SURGE experience, Eamon had only positive things to say, "SURGE was awesome. Everyone there, from mentors to entrepreneurs, to the staff were top-notch."
Read More

Mistbox (http://www.mistbox.com) announced today the official retail launch of its smart misting system for improving the efficiency of residential air conditioners and will also begin shipping out units to its Kickstarter backers. Powered by solar energy, Mistbox is an IoT technology that’s compatible with any residential air conditioning unit. It comes complete with built-in sensors to automate the cooling process, Wi-Fi integration to track savings and power consumption, and a mobile app for managing and analyzing power consumption in real-time. Mistbox commercializes evaporative cooling technology for residential application and sprays a fine mist to cool outside air as it enters the AC unit, enabling it to cool the home more effectively while reducing energy consumption. The computer inside of Mistbox can automatically sense ideal operating conditions to cycle mist at the appropriate times. Offering the easiest way for people to minimize their carbon footprint and their energy bill, Mistbox monitors its own performance for optimal efficiency. The self-contained system comes fully assembled and can be set up in less than five minutes -- owners simply have to attach Mistbox to their AC units and the tubing to a water source. “Sustainability and practicality were the biggest drivers behind the development of Mistbox,” said Josh Teekell, CEO and co-founder of Mistbox. “During our Kickstarter campaign, we received a lot of valuable feedback from our backers, which ultimately helped us to better refine the product and its design. We’re excited to begin shipping Mistbox units to our Kickstarter backers today and hope to help people save money and reduce their carbon footprint at the same time.” [caption id="attachment_309" align="aligncenter" width="464"]