Posted at 15:14h in Sustainability by Shen Ge 0 Comments
0 Likes

If you think research into transmission gears is yesterday's news, think again. Fallbrook Technologies, a startup company in Austin, Texas, has developed the NuVinci, a continuously variable transmission (CVT) technology that compared to conventional transmission, provides improved performance and flexibility. This tech can be applied in anything that requires transmission gears which includes bicycles, automotive accessory drives, electric vehicles, lawn care equipment to small wind turbines and beyond. The originator of this brilliant little design is a man named Donald C. Miller (Don) who was a cycling enthusiast. He wanted to build the fastest bicycle. Despite not having formal engineering training, his self-motivation drove him to not give up until he came across CVT. Though this idea was originally developed by Leonardo da Vinci in 1490, various problems such as cost, scalability, efficiency and weight have kept CVTs from widespread adoption and limited their practical applications. Don decided to change that. In 1998, Don and several angel investors formed Motion Systems, Inc. (MSI) to develop this tech. By 2000, he finished filing the first patent and at the end of the year, with new collaborators Miller and the Weiss Group LLC, formed a new company called Motion Technologies LLC. A second financing round in 2003 allowed validation and further development. Robert A. Smithson, a transmission expert, was incredibly impressed that he joined the company as a consultant and later as VP of Product Development before becoming the company's CTO. Thanks to Smithson, a subset of CVT -- the infinitely variable transmission (IVT) -- was discovered. An application in wind energy further excited the team. On April 13, 2004, Fallbrook Technologies was formed and additional funding and expertise came in. Notably, auto industry veteran Bill Klehm became CEO while Don Miller was shifted to VP of Advanced Research. Two years later, in September 2006, Fallbrook introduced the first commercial continuously variable planetary (CVP) transmission and full production of bicycles in Europe and US began in January 2007.
Read More

Posted at 15:05h in Sustainability by Shen Ge 0 Comments
0 Likes

The impact of Q Drum can be 663 million people, or about 10% of the world population.[/caption] Q Drum is a portable water container developed by South African engineer Piet Hendrikse which allows people in developing countries to easily carry over 13 gallons of water. Water is heavy. The average person can lug up to about 4 gallons (30 pounds) of water. In rural areas of the developing world, many women and children must make multiple trips each day to a river, well, borehole or other water source to collect water for their families. The Q Drum saves them time by allowing them to transport more water in a single trip. It also helps prevent debilitating back and neck injuries caused by carrying heavy loads. The drum can also transport other things such as foodstuffs and clothes. If some soap and water are added, the drum becomes a portable, manual clothes washing machine. Outside of the developing world, it can be useful in bringing water to those in need following natural disasters. Q Drum lets people roll a durable donut container along rough terrain. The container has a hole through the middle where a rope is tied that allows even a small boy to pull a fully loaded tank. The linear low-density polyethylene (LLDPE) means the drum is almost indestructible, lasts 8 years, and has no removable handles or other metal attachments. The rope if lost can be replaced by a leather thong, woven plant, or any other rope-like material.
Read More

Posted at 09:41h in Sustainability by Shen Ge 0 Comments
0 Likes
Introduction Note: This post was written by the founders of Yutumi. [caption id="attachment_320" align="alignleft" width="300"] 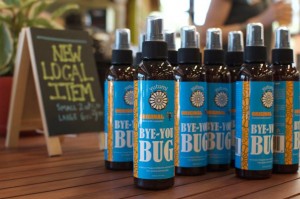 Yutumi bye-you bug products.[/caption] Sarah Plunkett and Ryan McDonner, owners of Yutumi (You-to-me) have launched a new bug spray that will change your idea of how you apply and think about traditional DEET Free repellents. Many bug sprays seen on the market utilize traditional essential oils such as citronella, lemongrass, geranium, etc. Not only do these essential oils smell like bug spray, they feel like bug spray too. These products tend to leave your skin oily and greasy. BYE-YOU BUG® was formulated to be the exact opposite of what you normally buy and use. It is non-greasy due to the main ingredients being pure vanilla extract (which is alcohol based) as well as soybean oil, citric acid (lemon juice), vegetable glycerin, and one essential oil that forms each unique scent. Therefore, you feel dry after spraying and rubbing it in to your skin. It smells aromatic because it uses vanilla as its base. As a result, our formula is the only formula on the market that allows us to customize scents based on an individuals needs and preferences. The formulation is comprised of food-based ingredients that are great for those who have sensitive skin and are worried about what they put on their body. It is safe to use on pets, kids, and adults. For those looking to enjoy the outdoors without smelling or feeling like they put on bug spray and eliminating toxins from their products and the environment, BYE-YOU BUG® is a great alternative. SPRAY MORE, SWAT LESS, SMELL GOOD!
Read More

Posted at 22:33h in Energy, Sustainability by Shen Ge 0 Comments
0 Likes
Problem: Massive Flooding in Bangladesh In Bangladesh, annual flooding can disrupt school for almost a million students. In many areas, roads are impassable during the rainy season from July to October, when rivers rise as much as 4 meters (12 feet). In the worst scenarios, people are drowned and left homeless. In 1998, flooding inundated two-thirds of the country, killing 700 people and leaving 21 million people homeless. The future is not going to get better with scientists projecting over one million Bangladeshis displaced by rising sea levels by 2050. [caption id="attachment_273" align="aligncenter" width="620"] 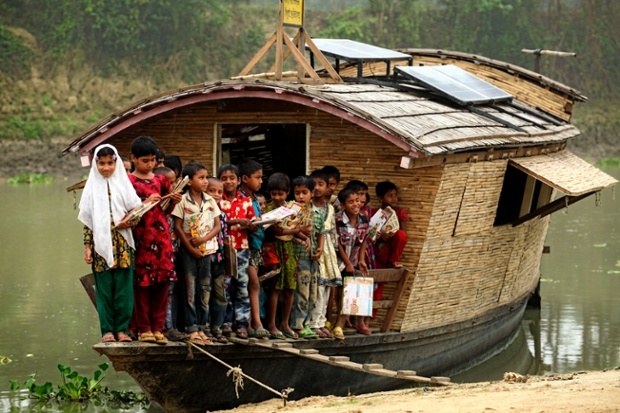 Solar powered school boats offers education to kids in Bangaldesh (Image: Shidhulai Swanirvar Sangstha).[/caption] A homegrown nonprofit organization called Shidhulai Swanirvar Sangstha has built a fleet of solar powered school boats to ensure education regardless of flooding or rising sea levels. Shidhulai is the name of a village in Bangladesh and Swanirvar Sangstha means self-reliant organization. Mohammed Rezwan, Shidhulai’s founder and executive director, grew up in the country’s northwest, where his organization operates. Growing up, his family owned a boat, which meant that he was one of the lucky ones who could attend classes all year. “Many friends and relatives were denied access to education,” he said. “I thought if the children cannot come to school because of floods, then the school should go to them by boat.” Interested in more of my posts and other writings outside of Impact Hound? Follow me on Twitter: @shenge86
Read More