Posted at 15:05h in Sustainability by Shen Ge 0 Comments
0 Likes

The impact of Q Drum can be 663 million people, or about 10% of the world population.

Q Drum is a portable water container developed by South African engineer Piet Hendrikse which allows people in developing countries to easily carry over 13 gallons of water. Water is heavy. The average person can lug up to about 4 gallons (30 pounds) of water. In rural areas of the developing world, many women and children must make multiple trips each day to a river, well, borehole or other water source to collect water for their families. The Q Drum saves them time by allowing them to transport more water in a single trip. It also helps prevent debilitating back and neck injuries caused by carrying heavy loads.

The drum can also transport other things such as foodstuffs and clothes. If some soap and water are added, the drum becomes a portable, manual clothes washing machine. Outside of the developing world, it can be useful in bringing water to those in need following natural disasters.

Q Drum lets people roll a durable donut container along rough terrain. The container has a hole through the middle where a rope is tied that allows even a small boy to pull a fully loaded tank. The linear low-density polyethylene (LLDPE) means the drum is almost indestructible, lasts 8 years, and has no removable handles or other metal attachments. The rope if lost can be replaced by a leather thong, woven plant, or any other rope-like material.

Hendriske thought of Q Drum while driving through villages near his home in South Africa. He saw people using wheelbarrows and old water drums to transport larger amounts of water. The solution was so simple people wondered why no one had thought of it before.

Q Drum is currently used in South Africa, Mozambique, Democratic Republic of Congo, and parts of east Africa. The current challenge is reducing the cost of manufacturing so that the people who actually need it can afford it. Each one costs $65. As the inventor said, the people who can afford it don’t need it. Q Drum has sought to align itself with international partners to manufacture under license where the need is high in order to reduce the cost.

What are the technical specifications of Q Drum?

Incredibly light, the Q Drum weighs just under 10 pounds when empty. Filled with water it weighs 120 pounds. Q Drum is also incredibly easy to store. Most existing containers can only be stacked two or maybe three high when filled with heavy fluids or chemicals. In a SABS (South African Bureau of Standards) compression test performed on the Q Drum, the maximum load reached before collapse was 3.7 tons which equates to 40 full containers stacked approximately 25 meters (80 feet) high. This exceeds the international stacking requirements several times; Q Drum is an easy vessel to store and transport in large quantities. 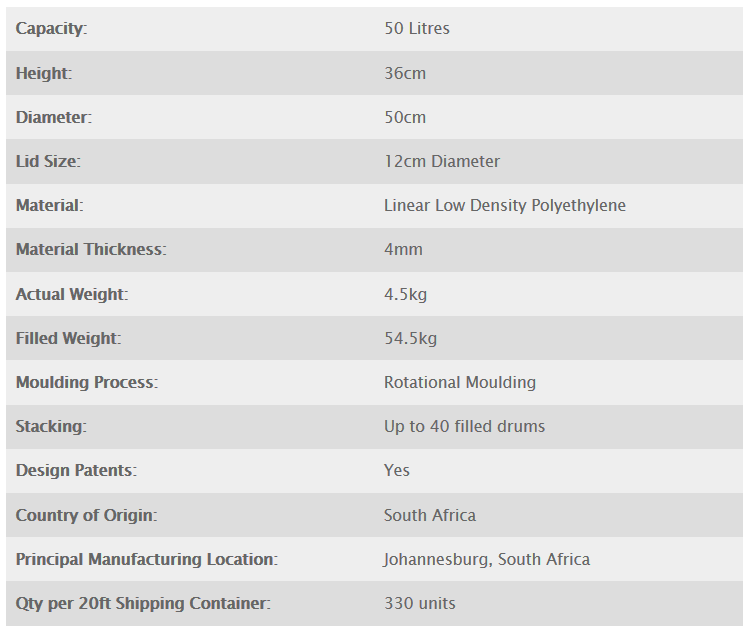 Q Drum has received numerous accolades since it first came out but a persistent issue has been the high cost. Aside from high manufacturing costs, there is also high shipping costs for customers overseas. Such containers have a high volumetric weight, which is the principle which freight companies base their costs on. This is how much space the product will take up in a container relative to its actual weight. Each individual Q Drum weighs only 4.5 kg (10 pounds) but its volumetric weight is 17.5 kg (40 pounds).

Hendrikse says, “Large orders that can fill a container, alternatively, shipping Q Drums filled with valuable fluids, is at present therefore the most economical way of transport from South Africa. Manufacturing the Q Drum in countries where it is needed is therefore the most viable, as it will in the end reduce the transport costs.”

Piet Hendrikse and his brother Hans Hendrikse are further developing the logistics of transport and manufacturing for Q Drum to lower the cost. As of latest, Q Drum has teamed up with Kopernik Technology Marketplace, Invent for Humanity, and I Need Fresh Water.