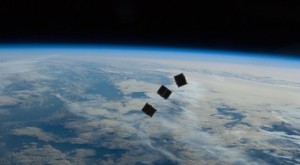 3 CubeSats deployed from the ISS in 2013. There is a growing small satellite market. Consider reading Small Satellites: Past., Present, and Future for more information. Photo: NASA

What is a small satellite? A small satellite is a satellite less than or around 500 kilograms in mass. The small satellite market can be further divided into microsatellites, nanosatellites, and CubeSats. Microsatellites range from 10 to 100 kilograms and often work in a constellation to do the task previously completed by a solitary satellite. Nanosatellites range from 1 to 10 kilograms and can include both single and multiple-unit CubeSats as well as other spacecrafts of any form factor within the weight range. CubeSats are 10 cm x 10 cm x 10 cm cube satellites with a maximum mass of 1 kg. These have been mostly used for technology demonstration and education such as solar sails, space tethers, and inflatable antennas.

An example of the rapid growth of small satellites are two California start-ups. Planet Labs and Skybox Imaging are planning to launch constellations of small satellites for Earth observation. In February 2014, 28 of the Planet Labs CubeSats were ejected out of the International Space Station. Since then, Planet Labs has stated that they plan to launch 131 new satellites in the next year to provide comprehensive snapshots of the Earth. Each Planet Labs CubeSat measures only 10 cm x 10 cm x 30 cm and has a mass of only ~5 kg. Similarly, Skybox Imaging is planning to launch a fleet of 24 slightly larger satellites. The first satellite was launched in November 2013 and the second satellite was launched in July 2014. These small CubeSats the size of phonebooks are not only able to take images but can also capture black and white video clips lasting up to 90 seconds at 30 frames per second.

Virgin Galactic is a British spaceflight company founded in September 2004 by billionaire Richard Branson with the dedicated goal of providing suborbital flights to space tourists and orbital launches of small satellites. Virgin Galactic’s LauncherOne project was first publicly announced in July 2012 though work has been conducted on it since 2008. Several commercial small satellite manufacturers including GeoOptics, Skybox Imaging, Spaceflight Services, and Planetary Resources have signed contracts for launches. It will be able to deliver 225 kg to low inclination Low Earth Orbit and 100 kg to a higher altitude sun-synchronous Low Earth Orbit. The fairings are approximately 1 meter in diameter with a cylindrical shape for the first 77 cm and a conical section above. LauncherOne will be released from the high-altitude aircraft WhiteKnightTwo at an altitude of ~50,000 feet above mean sea level. LauncherOne will free fall for ~4 seconds before the first stage ignites. 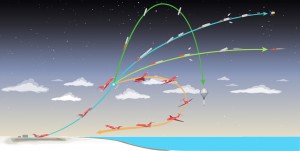 Generation Orbit Launch Services, Inc. (GO) is an American air launch company founded in April 2011 by Dr. John R. Olds, who also founded the space software company SpaceWorks Enterprises, Inc. (SEI). Aside from the suborbital capabilities provided by GOLauncher 1, GO is developing the GOLauncher 2 which will serve the small satellite market. GoLauncher 2 is an air launched two-stage rocket system that can deliver up to 45 kilograms (100 pounds) into Low Earth Orbit. The altitude can be as high as 400 nautical miles and the inclinations can range from 0 deg to 98.7 deg.

Generation Orbit has previously won the $100,000 prize for the 2013 NewSpace Business Plan Competition. In September 2013, they were selected for NASA’s Enabling eXploration and Technology (NEXT) contract totaling $2.1 million where they will launch a group of three CubeSats into a 425 kilometer orbit in 2016. On August 6, 2014, Generation Orbit successfully completed an air-launch test. 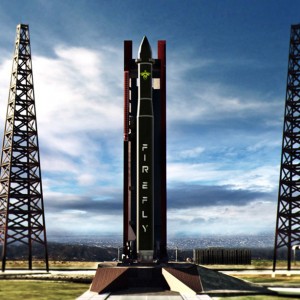 3D model of the Firefly on a launchpad. Photo: Firefly Space Systems

Firefly Space Systems is an American rocket launch company founded in January 2014 by Thomas E. Markusic, who previously worked as an engineer and manager at Virgin Galactic, Blue Origin, SpaceX, NASA, and USAF. The Firefly Alpha is a vertical rocket launcher designed to specifically address satellites under 1000 kilograms. The Firefly Alpha features two stages using methane fuel and all carbon-composite materials. The first stage also features an aerospike rocket engine while the second uses a conventional bell rocket engine. The It will be able to deliver up to 400 kilograms to LEO.

Rocket Lab is an American and New Zealand small rocket launch company founded in 2007 by New Zealander Peter Beck, an engineer and scientist with over 15 years of experience in propulsion research. Rocket Lab has partnered with Silicon Valley Khosla Ventures and is on schedule for a 2015 launch. The company has secured commitments for the first 30 launches. Rocket Lab says it requires $4.9 million for a launch and can provide at least 100 launches per year. The fuel required will be less than that for a Boeing 747 to go from San Francisco to Los Angeles.

The rocket called the Electron will specifically serve the small satellite market by lifting up to 110 kilograms of payload to an orbit of 500 kilometers. The Electron will be a 3-stage rocket that uses Rocket Lab’s proprietary Rutherford Engine, a regeneratively cooled liquid oxygen and kerosene engine. This workhorse of Electron has two variants in nozzle shape with one tailored for vacuum conditions and the other tailored for sea level. The otherwise duplicate engine design reduces cost for mass manufacturing.

Ventions is also funded by DARPA’s Airborne Launch Assist Space Access (ALASA) program. The ALASA program seeks to develop an air-launched rocket capable of sending a 45 kilogram payload into LEO with only 24 hours preparation time at a cost of $1 million. The ALASA program is also being worked on at Lockheed Martin in Bethesda, Maryland, Boeing in Chicago, Northrop Grumman in Falls Church, Virginia, Space Information Laboratories LLC in Santa Maria, California, and Virgin Galactic in Las Cruces, New Mexico.

The army is also pursuing its own nanosatellite launcher through the program Soldier-Warfighter Operationally Responsive Deployer for Space Initiative which will have the capability to send a 25 kilogram payload into a 750 kilometer circular orbit. In March 2013, the army awarded $19 million to Quantum Research International of Huntsville, Alabama.

For more information on small satellites, consider reading the book Small Satellites: Past, Present, and Future

by DK Publishing with Foreword by Richard Branson