A new space startup founded in 2013 in Boston called Accion (pronounced “ax-see-yon”) Systems has patented an ion beam technology to propel small satellites. As government-funded large launches give away to commercial small satellite launchers such as Firefly Space Systems, there’s a growing need to ensure small satellites have efficient propulsion system requiring little fuel to produce enough thrust. Without propulsion, a satellite has a very limited lifetime — possibly as shortly as a few weeks. As in conventional ion engines, Accion’s propulsion system produces thrust using electric fields to accelerate ions. However, the difference lies in how the ions are produced. Accion uses ionic liquid propellant which is a non-toxic liquid salt stored in passive plastic tanks. Ions leave thruster chips through small holes in grids over each chip and propel spacecraft in the opposite direction. This removes big ionization chambers, pressurized tanks, bulky valves, and external cathodes for neutralization. There are several major advantages with the low-cost hands-off manufacturing process being most touted as significant:

Accion’s major competitor in the realm of small satellite propulsion systems is Busek which has a lead of nearly 30 years more experience. However, Accion has said its design ensures a longer operational lifetime than Busek’s equivalent.

What does Accion sell? 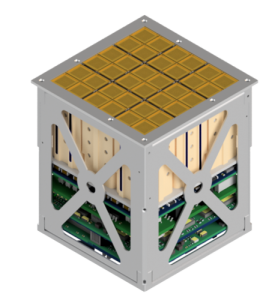 Accion has several different variations of ion propulsion engines ready to be manufactured by 2017. All the engines are restartable, throtteable, modular, and fully scalable. The actual engine is only as large as a penny. The MIN-0 is designed for Cubesats and small satellites. For a 25 cubic centimeter device, it can produce 10 Newton-seconds of impulse. The MAX-1 small satellite electric propulsion system has a standard size covering a third of a 1U (10 x 10 x 11.35 cm) CubeSat which can provide 100 Newton-seconds of impulse. MAX-1 can also come in custom designs including linear thrust plus attitude control or in-stack pure atittude control. The TILE satellite electric propulsion system currently available for pre-order on their website is a 1U grid which can provide 5400 Newton-seconds of total impulse.

Who are the founders?

Accion was founded by two MIT graduates, Natalya Brikner and Louis Perna, both of whom have been recently named to Forbe’s 30 Under 30 list. Natalya is the CEO and main founder of Accion Systems. At MIT, she co-invented the core technology that would become Accion’s first product line. Prior to MIT, she developed a new chemical rocket that spun into a space startup. Natalya’s co-founder Louis Perna was a perfect match. At MIT, he commercialized the ion electrospray technology that Accion would later adopt. Prior to Accion, he worked at different NASA centers where he researched ion engines and designed planetary exploration robotic systems.

What is the future of Accion?

The future seems bright for Accion. Last year [2015], Accion was named by Fortune Magazine as the most likely to become a billion dollar company at the annual Brainstorm Tech Conference. The company first raised $2 million in seed funding, then $7.5 million from partnerships with the Department of Defense, and most recently $7.5 million in Series A funding led by VC firm Shasta Ventures. As of February 2016, Accion has signed agreement with three partners — one government and two commercial customers. Miniature space propulsion which has a long time holds much promise in the burgeoning small satellite market. Further flights with commercial clients would ensure this technology lives up to its potential.