27 Jul Communication from the Sky: Sky and Space Global

A CAD model of a SAS satellite in low earth orbit. Credit: SAS

There are over 5 billion unique mobile subscribers (as of August 2017) in the world. Despite this prevalence, there’s a considerable proportion of the population which lacks this access. The global sphere sees three billion people without access to affordable communication services. Connecting such populations through terrestrial means is a monumental challenge in geographically dispersed regions – Latin America, Africa, and Southeast Asia. Sky and Space Global seeks to address the challenge of global communication.

Sky and Space Global (SAS) plans to close the gap in the market between existing satellite communications operators, such as Iridium, Inmarsat and Globalstar, and land-based mobile networks such as Vodafone, Telefonica, Airtel and Safaricom. Affordable mobile services are critical for the economic and social development of many developing countries.

Sky and Space Global is working on a constellation of 200 nanosatellites of the 3U configuration in equatorial or near-equatorial low earth orbit (LEO) for narrowband communications. The total cost of all the satellites is expected to be $150 million. SAS is the first company to consider using nanosatellites for communication.

As an example, Sky and Space Global provides WeFarm with communication infrastructure services. A farmer can text Wefarm and agricultural experts can provide feedback. Despite this, the problem with rural areas is communication infrastructure, so a farmer has to wait until he or she has signal to make a phone call or send a text message. SAS enables people to use their phones by giving them a small satellite terminal which acts the same way an internet browser works through Wi-Fi and Bluetooth. Everyone that connects can send messages, pictures, voice recording and phone calls.

Meir Moalem, CEO and Managing Director of Sky and Space Global (SAS), co-founded the company with Meidad Pariente and Yonatan Shrama at the end of 2015. SAS currently follows a different funding structure than most. Most NewSpace players rely on a few rounds of initial seed funding sourced largely from private venture capitalists. Sky and Space Global’s original plan was to do the same — until its executive team met with a group of Australian investors, who suggested they conduct a Reverse Takeover (RTO) on the Australian Securities Exchange (ASX). before being acquired by an Australian company. The firm is now traded at the Australian Stock Exchange (ASX) and has been for more than a year and a half.

The major advantage is that the RTO allowed Sky and Space Global to expedite the funding it needed in order to materialize its vision — giving it the first-mover advantage — while also keeping the majority of the shares in the hands of the company’s founders, Pariente and Chief Executive Officer (CEO) Meir Moalem.

What are the satellites’ technical details? 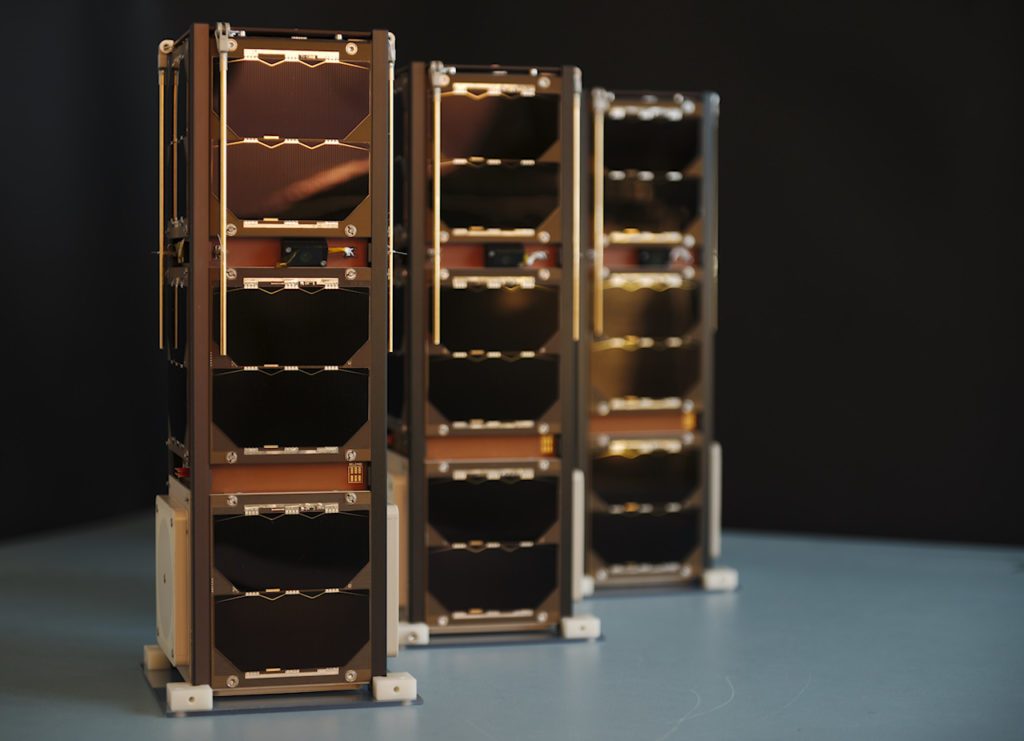 The satellites are now evenly spaced in one singular orbit approximately 700 km apart. Prior to the launch of SAS’s first three satellites called Diamonds in June 2017, they went through months of proof of concept testing across a number of functionalities, including phone calls, Internet of Things (IOT), Machine-to-Machine (M2M), instant messaging, Push-to-Talk (PTT) services, and data store-and-forward between different locations on Earth.

Future satellites will be launched to an orbital altitude ranging from 700 – 730 km with inclinations ranging from 0 degrees (equatorial orbit) to 13 degrees. The right angle of ascension (RAAN) varies from 0 to 270 degrees for non-equatorial orbits. For those more technically minded, the inclination is the angle of the orbital plane relative to Earth’s equatorial plane, the altitude is the height above the Earth, and the RAAN is the angle measured eastward from the First Point of Aries to the node where the node is defined as the intersection line of the orbital plane and the equatorial plane.

What is the plan for the future?

SAS is preparing for the launch of 20 nanosatellites in Q1 2019. The full constellation of 200 more nanosatellites will be launched by 2020, giving equatorial coverage of Earth. According to SAS, it expects to be generating significant gross revenues of around A$300 – $500 million (US$220 million to US$370 million) per year once approximately half of its intended network (100 nanosatellites) is successfully launched. The full constellation can generate up to A$1 billion (US$740 million) per year.

In July 2018, Sky and Space Global signed a memorandum of understanding with China Great Wall Industry Corporation (CGWIC), a wholly-owned subsidiary of China Aerospace Science and Technology Corporation, to explore the provision of launch services.

“This MoU is the product of a steadily growing relationship with Sky and Space Global which I anticipate will be mutually beneficial,” said Mr Fu Zhiheng, executive vice president of CGWIC.

Should you invest in this company?

Sky and Space Global has a unique funding structure compared to most new space companies. Its development has advanced rapidly due to its legal structure as a public company which allows it to raise funds from anyone who buys its shares.

It has also snagged some reputable achievements such as enabling the first smartphone voice call and first financial transaction using a nanosatellite in orbit. There are already three of their satellites in space and they are currently operational. Furthermore, the satellites themselves are relatively inexpensive. Mr. Moalem has said, “Our total constellation costs just $150m (£108m). That’s less than the cost of a single standard communications satellite. This is what we mean when we talk of a disruptive technology.”

Right now, the company is “somewhere in between the Preliminary Design Review and Critical Design Review of the system itself” according to Pariente. Its partnership with satellite manufacturer GomSpace also gives it credence.

Aside from the demand by three billion people still unconnected, the market is supplemented by the wide pool of potential Internet of Things (IOT) applications — supporting the more than 70 billion devices related to asset tracking, animal tracking, gas and oil lines, electricity lines.

Lastly, SAS has continued to raise more funds from institutional investors. In early March 2018, SAS raised A$10 million from institutional investors and has opened the door for retail investors to participate in a share purchase plan to raise a further A$5 million. The purpose of raising around A$15 million is to facilitate the deployment of 20 Pearl nanosatellites and to move the company closer to achieving around $1 billion in annual revenue when its entire network is completed.

In conclusion, considering the disruptive activities in communications that SAS has undertaken, potential investors with an interest in global communications should consider researching more into this company for further details. Further information can be found on the Sky and Space Global website: https://www.skyandspace.global/investors

How Sky & Space Global aims to close the digital divide